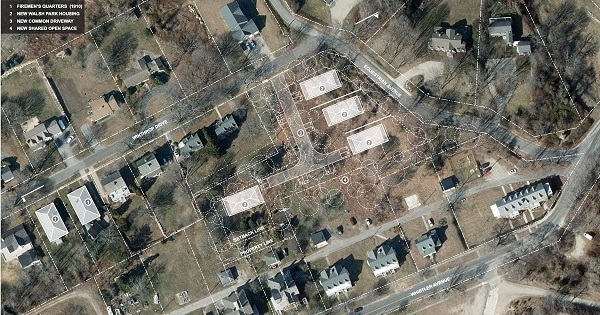 From: Fishers Island Union Free School District Board of Education

Re: Sale of School District Property

This memo to the community seeks to answer some questions about the proposed sale of land to Walsh Park. The school district feels it is important members of the community have accurate information as they are asked to vote on this proposed sale.

The Fishers Island Union Free School District owns land contiguous to the faculty housing units.  This vacant land is not used for school purposes and hasn’t been for many years.  It is likely the land has never been used by the District for educational purpose. There are no plan(s) to do so in the future.  Given this, the District explored possible options.  Selling the unused and unwanted land was the most viable.

A sale would bring revenue to the District and potentially increase tax revenue after the sale if new housing brought new residents.  Simultaneously, the Board believed selling the land could improve options for affordable housing.  This is a Board goal – to enhance/improve affordable housing on Fishers Island.  Expanding affordable housing is a necessary measure to promote a steady, sustainable Island population of school aged children.

During the course of discussions, the Board acknowledged the findings of the March 2014 Yale Urban Center study on Fishers Island, Yale Study: Sustaining Fishers Island (http://fishersisland.net/yale-...) which found “a dearth of affordable and appropriate year round housing” as a key contributor to there being “no natural growth to [the] Island population” (Id.) (http://fishersisland.net/wp-co...).  The Board also determined the District’s best interests are served through a sale of the parcel in a manner which mitigates expenses and does not impose undue costs associated with marketing, brokerage commissions, fees and costs associated with listing and/or bidding.  Walsh Park is an Island based not-for-profit corporation.  Its mission is to promote the viability of the year-round Fishers Island community by creating and maintaining a supply of attractive and affordable housing (http://walshpark.org/walsh-par...).  Walsh Park is interested in purchasing the parcel to be used for affordable housing.

After extensive discussion and dialogue the Board decided to ask the voters whether they approve the sale of land to Walsh Park.  Walsh Park offered $410,000 for the parcel.  The District received no other offers for the parcel.

Voters are going to be asked to vote on the sale to Walsh Park.

A school board may sell real property it owns “at such price and upon such terms as said voters shall prescribe”. The District obtained an appraisal. Based on that, the Board agreed to a price for the sale. Recent suggestions that the District receive a new appraisal and potentially change the agreed to sale price to Walsh Park is not feasible. This would mean the Board would renege on the agreement with Walsh Park and engage in bad faith. The Board will not do that.

The District entered the agreement with Walsh Park in good faith and now asks voters whether they wish to approve the sale based on that good faith.  The District negotiations were open and clear and known to anyone who wished to be part of public board meetings.  Suggestions that this process was not open are inaccurate.

Suggestions have been made that there are conflicts of interest. There are none.  This has been checked and verified with the school attorney.  The fact that a board member may live in/work for Walsh Park owned housing does not create a conflict of interest.  The superintendent has also recused himself from any Walsh Park discussion involving the school to avoid any potential and/or perceive conflict of interest.  This recusal involved physically leaving Walsh Park discussions so as not to even influence any potential outcomes.

The District is not selling this land at a discount. It is selling the land at a market value to a proposed buyer who can help satisfy the multiple goals of the District including receiving funds for unneeded, unwanted lands.